Is There an “Animal Heaven”? 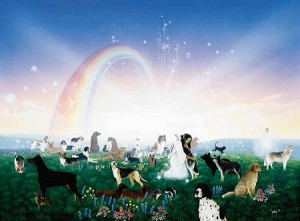 At the animal crematorium near us, you can watch your pet’s body enter the flames through a glass wall. Behind the conveyor belt carrying your pet’s corpse toward the oven is a giant mural of “animal heaven,” an idyllic landscape of mountains, river and flower carpeted valleys. Fluffy clouds drift across deep blues skies spliced by an outsized sparkling rainbow. Butterflies and birds flit about. Sheep gambol on the hills. Dogs play with sticks and roll in electric green grass. Cats chase their tails. And horses joyfully charge across the landscape at full speed. There is not a human to be seen. Messages from owners are scrolled across the wall. “We will always love you, Rufus.” “Sabine, you were the greatest cat that ever lived.” Costumers were encouraged to write their final words to their pets in a guest book. Many people asked for forgiveness for putting their pets to sleep. Their messages conveyed real pain.

It has become a truism that the passing of a beloved pet causes a puzzlingly deep grief. People talk about the loss of animals’ unconditional love, their loyalty and willingness to please as factors. And pets never really grow up. One of my most loved was a Roman street cat named Uggles. Uggles lived to the venerable age of 24, a remarkable life span for any cat. Nevertheless, he stayed a baby, pre-verbal, full of cuddle energy, and about the same size as a one-month old infant. I felt responsible for him in every way. Had I really been doing my job, he would never die but outlive me, as all infant-like creatures should. Only once in a while did it occur to me that were he my son, he would already have finished college and gone on to establishing a career and possibly a family.

There is another pain-exacerbating factor, however, and that is the notion of animal heaven. The traditional thinking is that if animals have souls (which of course they do), their souls do not go where we go after we die but someplace else. And that place is separate from ours, made for and limited to a “lower” consciousness. Animal heaven and the human afterlife at no point connect. There is then, no possibility of meeting again.

I’ve had a lot of pets. At one time my husband and I had ten cats, a dog and a chicken living with us. Deaths were frequent yet each one was unique. All of them died naturally. We assisted every one of them with tremendous help from friends and family members already on the other side. Sometime the dead would reveal the exact time passing would occur. I took care to psychically watch my pets’ energy bodies leave, usually lifting out somewhere near the crown of their heads. The stories are astonishing and I promise one day I will write about them if you want to hear them. Each pet went to a different kind of afterlife. With only one exception, they were taken up by friends and relatives. In Twyla’s case, it was her original owner, Michael, who took her. He had been dead for some eight years by then. When he grabbed the cat as she shot out of her body he snapped at me “You’ve had her long enough!”

The mechanisms of animal consciousness are really no different from ours. They, like us, will gravitate toward conditions in the afterlife that are optimum for their wellbeing at that moment. And like humans, they create portions of their afterlives out of the reality they knew in the body. My Turkish street dog, for instance, was taken by my father. She still lives with him, at least part of the time, although they never knew each other in their incarnated lives. My dog’s happiest moments in life were the walks. She was her most exuberant in corn fields, madly scurrying between the stalks sniffing out hares. She still takes those walks with my father. This is not to say that a pet’s afterlife is limited to animal-human activity. They have the ability to expand in any direction they can conceive, just as we have. Nor would wild animals choose such afterlives for themselves. It would be incongruent with what they knew and what they valued. From what I have seen, herd animals join herds, birds join flocks, gazelles range on unspeakably beautiful plains. Yet they possess powers of mobility that far exceed what they knew in the body. Yes, pigs do fly. And they are safe at last from harm.

Research based on thousands of afterdeath communication experiences has shown that a full 16% of all afterdeath communication occurs with a person’s pet! What’s more that pet usually shows up with a relative or friend of the person in tow, despite the fact that the deceased human may never have known the pet on earth. Pets are also among the first to greet their owners when they pass. So, answering the question “Is there an animal heaven,” I would say no. But there is indeed an animal afterlife, one they can share with us or not depending on their individual needs and mindsets.

There’s a sweet book out on peoples’ real-life experiences of their deceased pets visiting them called Animals and the Afterlife, by Kim Sheridan. Check it out by clicking here.