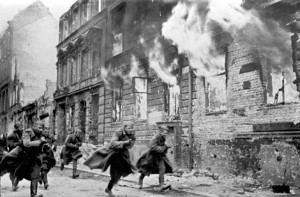 This is the fifth post in a series on ghosts. Ghosts are not the same as the dead. Sometimes I encounter them spontaneously, that is not in a professional setting. If they are strong enough to capture my attention, I will usually stop whatever I’m doing to see if I can help them. One such encounter was with a female personality whose name I never learned. I call her the Berlin woman, because I met her in that city in Germany. Her core personality died during the Battle of Berlin in World War II, while trying to save her baby son. The encounter took place a few years ago on a bright sunny day, when I was casually strolling down the streets with my friend Anne, an intelligently rational person when it comes to the supernatural and a native Berliner. For some reason I was drawn to turn down a certain street that offered not the least attraction from a tourist’s point of view. Anne unwillingly dragged behind. Following an inner pull took me to a five-story office building of indeterminate style, one more dreary survivor from World War II. As I drew closer, the bullet holes still in the gray stone façade caught my full attention, seeming to grow larger and more porous. I was falling into a trance. Suddenly the building was aflame. Russian soldiers were rushing down the street, shooting and throwing grenades, followed by a tank. It was chaos.

A dark-haired woman dressed in a gray wool skirt and a simple white blouse was trapped with her co-workers in the blaze on the fourth floor. She opened a window, climbed out and dropped to the pavement below. I was horrified. I knew she had not jumped because of the fire, although it was the fire and the invasion that provoked her. She had jumped because she realized that the city was under siege and her baby boy who was elsewhere in the city was in danger. She wanted to find him and protect him, which meant she had to get out of the building immediately. The only available exit was the window. Had she stayed in the building she would have died anyway, amidst so much terror and confusion that her intention to protect her son, alive or dead, would have been lost. As illogical as it seems to us, choosing the manner of her death allowed her heroic purpose to stay intact.

This episode was not something I happened to see out of the corner of my eye. It was strong enough to make me collapse on the sidewalk. Sitting there slumped against the wall, her shock, her hope and despair, her reasoning thundered through every cell of my body. I let it all work through me, listening intently to her innermost thoughts, sobbing out her torment, while simultaneously talking to her out loud, her words intermingled with mine. As her distress worked itself out through me, it began to neutralize and release, so that that the ghost part of her that was electromagnetically locked in 1945 could be freed. My poor friend Anne watched from afar, not daring to interrupt what must have looked like a nervous breakdown. Fortunately, she did not have to contend with curious passers-by for the street was oddly empty. Once I was satisfied that the ghost was indeed freed, I collected myself, stood up and dried my eyes. Anne and I walked on in silence for awhile. I noticed she kept a certain distance from me.

Thinking Anne was owed an explanation for my bizarre behavior, I briefly explained to her between whimpers what had happened. Again silence. Eventually she asked rather shyly if she could pose a question. I winced in uncomfortable anticipation of some delicate probing on her part about the state of my mental health. Instead, she wanted to know why of all the hundreds of people who were massacred on that same street that day I singled out this one woman. It seemed to me rather that the Berlin woman and I singled each other out. We resonated with each other. I was therefore psychologically tuned to hear her heartrending melody, which had been playing her final moments on etheric radio waves for over fifty years.