The Afterlife, the Oversoul, and the Nonlocal You

The more I work in the field of afterlife studies and the more people I meet from the “other side,” the more I have to question current concepts of the afterlife. Most people assume that the afterlife is local, meaning it has a definite place or location, spatially as well as temporally. Of course, this is not true. If it were true, the dead would never know when to meet you, let alone where, because they too would be bound by place and time. But they are not. Hence they know when and where to find us with uncanny precision. They know exactly where we lie on our deathbeds and when it’s time to come get us. The abundant evidence of deceased friends and relatives warning the living of impending danger is perhaps the simplest demonstration of the dead’s nonlocality.  They can roam into our futures and peer into any physical location or event, whether it has happened yet or not.

Time is not totally meaningless to them though. It is something that they can return to when they want, something that is bendable to their needs.  A moment to us can be experienced as an eternity to them or as time standing still. Conversely, those stretch of years before we reunite with our departed loved ones usually have no time significance whatsoever to the dead.  They never have to wait! Since the dead seem to be able to project themselves into any time and place, including their own past and future reincarnations, why then do we call “when” and “where” they are in the afterlife?

To complicate matters further, in my work I frequently see those who are not yet born alongside those who have already died. Is the afterlife, then, also the “beforelife?” The answer seems to be yes, although existential experiences may differ. Still, the preborn speak with the same mature, rational clarity as the dead. It is clear that the non-physical state of being, whether after death or before birth, cannot be described in terms of sequential time. There are, however, decisive indications that even in nonlocal realities borders exist, presumably psychological borders, a subject that I hope to tackle in the future. Perhaps we should attempt to abandon the convenient idea that the life we are in now is somehow sandwiched in between birth and the afterlife. But then, where should we situate our lives?

This is what I am playing with now, the notion that we, like the dead, are projections into a plane where we create with the illusions of time, place, and matter. This leaves open the all-important question of what part of us might be doing the projecting. If we look at the dead and the preborn for models, 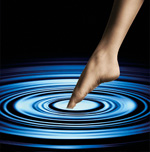 we see that they project into our world not just from a nonlocal reality but also from a standpoint of impossibly heightened awareness, meaning, from their immortal selves. Is that true of us as well? Are we projecting from that greater portion of our identities not focused in physical reality?  Is our existence nothing more than a toe in the water? But surely like any toe, this toe, our lives, our projection, is sentient and sends its experiences back to the whole self.  And like any toe, it would be in constant communication with the whole, receiving impulses, impressions, and drives from many portions of the self, including the transcendent self.

But would knowing this actually help us? Would we live better, more purposefully, more joyfully, if we knew deep down that we are merely projections? That the far greater portion of ourselves lives outside physical reality?

I believe we would. I believe it would relieve us of the colossal burden to live and die in socially approved ways. We would be more original in our creativity, more playful. We would act more from our authenticity and take more risks. I also believe we would take advantage of this awareness to willingly project into other zones, physical or not. Projection would open up many aspects of the self, from incarnations, past and future, from the transcendent self, and potentially, from the mighty entity that spawned us. Instead of being sandwiched in, we would know that what we are at this present moment is a point in our greater existence on which we are now focused.

What if that toe became aware of all the other toes, each one in their own pond, each one an independent life but profoundly connected to the other, even acting in unison. And then, suddenly the whole form opens up, the entire body, and the mind that creates that body and maintains its parts?

While I was writing this, I thought to myself, why not try it? I tapped into my greater self, that massive entity often called the oversoul. This identity that gave birth to me and to all the incarnations connected with me, alive and dead. That gave me the gift of independence and free will. As soon as I felt the connection, a huge spurt of energy poured into my body. I became instantly relaxed, inwardly calm and joyful. Finally, for a moment at least, I felt fully integrated.

This isn’t the end of it though. That night I caught myself in a dream. I was sending a new script out to all portions of myself, in all the dimensions that are of concern to me now. A new script! My mind trying to grapple with the immensity and instantaneity of such an act turned the new script into an email blast of zip-locked folders! Could it be that this tiny spurt of awareness led to an action on the scale of an entity, affecting every aspect of my greater identity, regardless of what pond or ocean or cosmic sea it’s in? I can’t wait to find out!