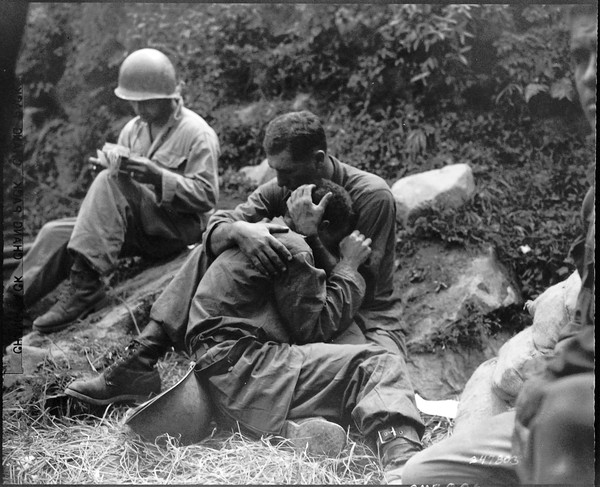 When I was a little girl, I was taken to meet my Uncle Arthur. Uncle Arthur lived in what was then back in the 50s popularly called an insane asylum. No one explained to me what an asylum was and no one told me what was wrong with my uncle. I remember thinking that he must be very cold because he shook the whole time we were visiting him and kept his arms wrapped around his body. He was not able to speak to us sensibly. I did know he was aware of our presence by the furtive glances he shot at us from the corner of his eye. Is was not until I was well into my adult years that I learned my uncle had been a top notch college student when World War II broke out and he was sent to the Pacific arena. Uncle Arthur was an innocent, inexperienced Mid-West boy when he went to war. He was not prepared for strong emotion let alone for witnessing some of war’s most gruesome horrors. What put him over the edge was watching his closest combat buddy getting torn apart by a shark. My family called his condition shell shock. Fifty years later, he died in a hospital for the mentally ill.

The days of misinterpreting such conditions have been over since the 1970s when Post Traumatic Stress Disorder (PTSD) was first diagnosed. Since then there have been many advances in our understanding of PTSD, the greatest of which is the recognition of its symptoms. First let me say that the word disorder is something of a misnomer. If you think about it, a PTSD reaction to severe trauma is in its own way normal because it uses the mind’s ability to shut down in order to temporarily protect the integrity of the self. For this reason alone, you should realize that what you think of as a mental sickness is nothing more than the psyche’s way of protecting you. This is a good thing for a few months, until a person finds a safe haven, but in the long run it becomes very destructive. If you really understood the psyche’s protective mechanisms and began working with them instead of attempting to suppress them with drugs, alcohol, chronic depression, behavioral modification or spiritual affirmations, you can be cured. In this article, written for the many thousands of you who are suffering from PTSD, we will look closely at the symptoms in order to understand what they are trying to tell you.

You need to know first that I have been a certified regression therapist since 1987, specialized in helping those who experienced childhood violence, and since 1978 a professional psychic. In either profession, a person works directly with the so-called subconscious. Not theoretically. Not intellectually. But directly. That means that I see the subconscious differently from the way traditional psychology does. Make no mistake, the subconscious is not your enemy nor is it primitive. It is the essence of brilliance and creativity. No matter what your IQ is, when you in the realm of the subconscious, asleep and dreaming, you are a genius. The subconscious knows exactly what is wrong and how to fix it. All we need to do is let it speak. 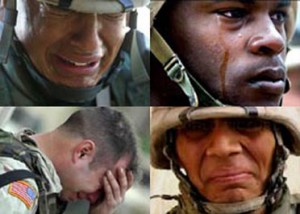 Since this section is devoted to you soldiers and veterans who have seen death or perhaps even caused it, the whole subject of death and what happens afterwards is likely to create anxiety and provoke doubts or questions that challenge your faith. In these pages we are going to look at death and the afterlife and at forgiveness and resolution with the dead. You are probably aware that the suicide rate among active duty soldiers has been rising steadily for years. So, just in case you’ve been contemplating taking your own life, we are also going to explore what happens to suicide victims after they die. But let me warn you beforehand, although I am an ordained All Faiths reverend, I am also an academic of the ancient Near East. So I understand religious teachings differently from the way mainstream religions do and I read the Bible from a perspective of thousands of years before it was written. My spiritual understanding comes from my own experience and knowledge.

Where I do agree with mainstream thought, however, is what psychology attributes to the cause of PTSD. If you are or were in the military, you may have been on missions that exposed you to life-threatening experiences. You may have been shot at or seen a combat buddy of yours shot. You may have been mortared or rocketed or driven a truck on a mined road or flew a helicopter under fire. You may have been a POW, tortured either physically or mentally or both. You may have been raped. On the other hand, you may have killed, tortured or raped someone yourself. Any of these events present typically intolerable threats to the mind, body and spirit. Because they are intolerable, you shut down to save yourself from further harm. What else could you have done?

In the meantime, I want to hear your stories. I want to know what your experiences were in the field.

Soldiers and Veterens, You Can Recover from PTSD

After-Death Communication, Afterlife Studies, Evidence for Survival After Death, For All Soldiers Past and Present

Blogs, For All Soldiers Past and Present

Soldiers and Veterens, You Can Recover from PTSD