A Mother’s Remarkable Communication with her Deceased Son

A month ago, a woman wrote me about her experiences with her son in the afterlife. I was so taken by her spontaneous abilities that I asked for permission to post her story. Although I have changed her name to preserve privacy, the words are otherwise hers.

My name is Georgia and my son died by suicide on April 18, 2012. He was 31 years old and a gifted architect and just a fun guy. He was married but had no children. As you can imagine, losing him was devastating to me and to our family. We were shocked and in total disbelief that this has happened to us

The first contact I had with Ben was on May 10, 2012. I was lying in bed still awake and thinking about getting up when I heard his voice. It was as clear a bell. I could even feel his breath in my ear. All he said was, “Hey Mom.” Now, this was the way he always began his voice mail messages to me. I was so happy to hear from him!!!! A week went by and again I was lying in bed in the early morning and felt him touch my shoulder. I started having monthly dreams about Ben from that moment on.

The dreams are very clear, not disjointed as some dreams can be…a real conversation between the two of us. In the first dream he told me he never died. We both cried and held one another. Again in June, I had another dream around the same time of the month. This time I was able to hug him and could feel his skin and the sweat on his shirt. We hugged and cried then too. July, another dream, more crying and hugging. Every month around the same time, another dream. I keep a journal and, of course, write every detail down. I am so glad I did!

The best dream happened on February 12, 2013. I was actually awakened by a bright light in my bedroom, very bright colors of pulsing blue and white light. I watched the light pulse on the bedroom wall and it took the form of an outline of an angel, a very primitive angel with no face. I knew immediately that it was 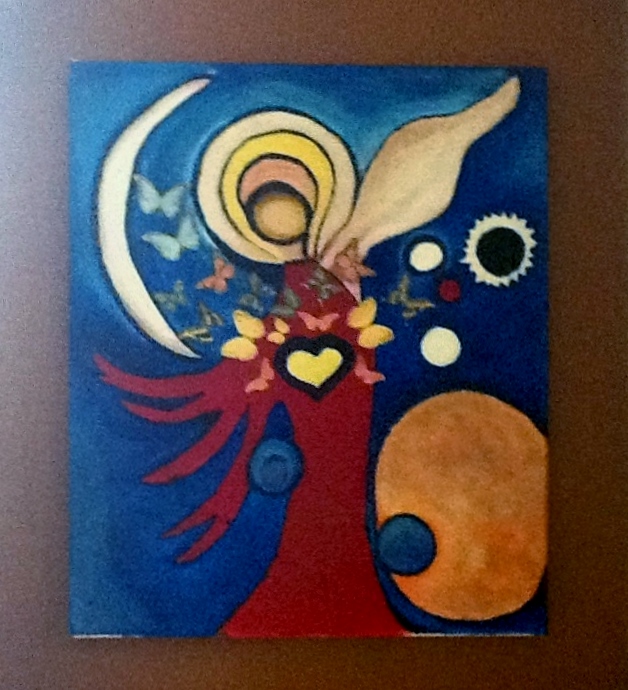 Ben’s angel!!! I tried to take pictures of it with my cellphone camera but could not capture the image. I then went back to sleep only to be awakened again by an even more beautiful light of purple and blue surrounded by a gold glowing halo. It was just stunningly beautiful! I fell back to sleep again and then Ben came to me in my dream and said to me, “Mom, our bond can never be broken. I am always with you.”

I then saw his angel again, more defined this time. The angel’s head was bent down and a red heart pulsed in her chest area. Then butterflies starting coming out of her and she disappeared. I woke up sobbing with joy!!!!

I then had three dreams about him in the month of March, one in April around his anniversary date and the last one in May. No dreams in June or so far this month and I miss them so much! I have had other types of contact with him though. In my office desk drawer when I was looking for a pen, I found an old birthday card he had sent me. Twice I found a small picture of him on the kitchen floor and counter on the exact dates we were to have dinner with his friends from college.

I painted the picture of the angel. It turned out beautiful. I just want and need the dreams to continue. He feels so far away right now…why has he stopped coming to me in my dreams????

I wrote Georgia back a congratulatory note, summing it up with advice—“Here’s your challenge. If you want to know why the dreams have stopped, ASK BEN!!!! Don’t full around with secondary sources, go to the true source. You’ll get your answer.”

She wrote back immediately that she had a gut feeling about why the dreams stopped. She believed it was because she was experiencing anger towards her son for leaving. She even admitted swearing at him now and again, not forgetting to add, of course, that she loved him and would always be there for him.

Along with this communication she attached a picture of Ben’s, a real poster boy for a gorgeous All-American guy, and her charming drawing of his angel, posted above.

My response to her gut feeling was sharp and to the point: “I need to tell you right now that genuine—and justified—anger is probably the fastest, surest way to make contact. You may believe that your anger is blocking him coming to you in your dreams, but that is no more than a belief of yours. Such a belief, however, is enough to block contact. I’ve worked a great deal with people who have taken their own lives. In almost every case they feel terrible remorse for the pain they’ve caused. Ben may need to unburden himself with you.

At my suggestion, she began reading my book, The Last Frontier, especially the chapters where I explain how to communicate with the departed and what to expect.

Within three days, she wrote back again, clearly excited.

I have been practicing the principles and suggestions from the last chapter in your book and I think it has opened up even more communication…. I felt his presence yesterday afternoon and my whole body tingled. I started to speak to him right then and there, and that night he appeared in my dream!!!!!

I asked him why he didn’t tell me he was troubled or needed my help. He said, “I tried Mom, I just couldn’t.” He said he was worried that he didn’t have a “job.” I told him, “just come home…you can always come home.” Then we took a ride in his car and had fun laughing and feeling the wind whip through our hair. He was wearing his grey sweatshirt and had a smile that would light up a room!

I’m sure there is a lot more to come from Georgia. Stay posted!

What the Dead Say About Suicide

After-Death Communication, Afterlife Studies, Evidence for Survival After Death, For All Soldiers Past and Present

After-Death Communication, Blogs, Grief, Mothers Who Have Lost a Child